Roll bending could be compared to driving a car. You learn by doing. It is done intuitively. To do it well you need experience and confidence, because with theory alone you won’t succeed. Enver learned the basics of roll bending at VandeGrijp. ‘I worked with an experienced guy for a few weeks and then I had to prove myself.’

When Enver started at VandeGrijp he hadn’t worked with steel before. Seven years later he has become an important part in the production process and assures that the process flows. ‘I have to assign welders to their job and make sure there is enough work for them. When there is enough, I start working on the roll-bending machine to roll tubulars. When orders come in, I try to combine them by size, because exchanging a roll in the machine, takes two hours. I rather use those hours to create something.’

Compliment of a connaisseur

At VandeGrijp, Enver worked at very large projects, but the small exactly sized production is where his heart is. ‘I once worked at a very small diameter tube when the director stopped at my station during a factory tour with a group of customers.  My colleagues didn’t know what I was doing but the director saw it immediately and started explaining to the customers. Receiving a compliment of a connaisseur, I do like that!’

VandeGrijp is known to make exactly round tubes, straight as an arrow. Enver is proud to fabricate tubes with deviations of less than 0.3 millimeters over 9 meters length. ‘In Germany they may fabricate thicker tubes, but we have the better quality. And the good thing is, that we continuously improve. When I started, we controlled quality with chalk on the wall, now we work with lasers. It was one of my ideas when I found a discarded laser.’ 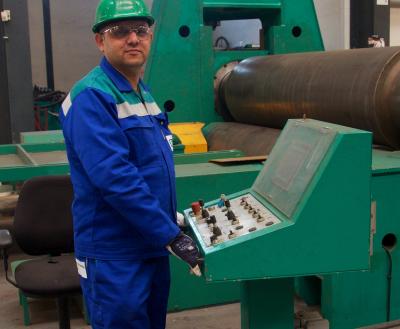